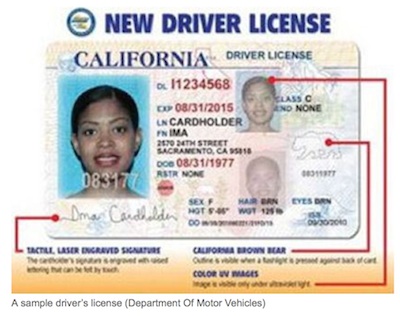 Also on the website is a list of acceptable forms of identification (click link), which includes, but is not limited to, foreign passport or nationality card.

It’s been a heated battle in many states, including Oregon, which, in a recent election, overwhelmingly overturned it’s previous approval of state issued driver’s licenses to those without legal immigration documents. In California the law would have gone into effect much sooner, however the Department of Homeland Security (DHS) had not approved of the visual design of the license.  On September 17th, 2014 a letter was sent to the Department of Motor Vehicles by DHS director Jean Shiomoto indicating that a design has been chosen in which undocumented aliens can receive a license with the caveat that said license will reflect their immigration status, or rather, lack of status. The phrase “FEDERAL LIMITS APPLY” will be written across the front of the license. Governor Jerry Brown then signed the bill into law, stating that this will be the beginning of a new national movement [paraphrased].

The following states have previously enacted, or are exacting, laws in which undocumented residents can obtain a driver’s license:

If one wishes to obtain a license in any of these states, please look to the local Department of Motor Vehicle rules, as each state has different prerequisites for establishing jurisdiction/residency.

Although the new law will at the outset cost California tax payers money, as more staff will be needed to process the abundance of applications to be received, the State of California stands to earn more money in application fees than expending, whilst creating jobs for legal residents.  All in all, it’s a good deal for legal citizens (fiscally), as well as undocumented aliens.

If you have any legal or immigration questions, please do not hesitate to contact us!